Here at Hydron Module, one of the many services we provide to our customers is the analysis of different systems in comparison to a new Hydron Module geothermal heat pump system. We take into account the home's location and seasonal demands, as well as what a properly-installed system from either technology would cost in supplying heating, cooling, and hot water.
Today, let's take a look at an HVAC system that is prevalent in "cooling-dominant" locations: the air-to-air heat pump. In this case study, we'll review the differences in the two systems, the performance in heating and cooling, and how the savings compare between geothermal and air-to-air heat pumps in a real-life scenario. 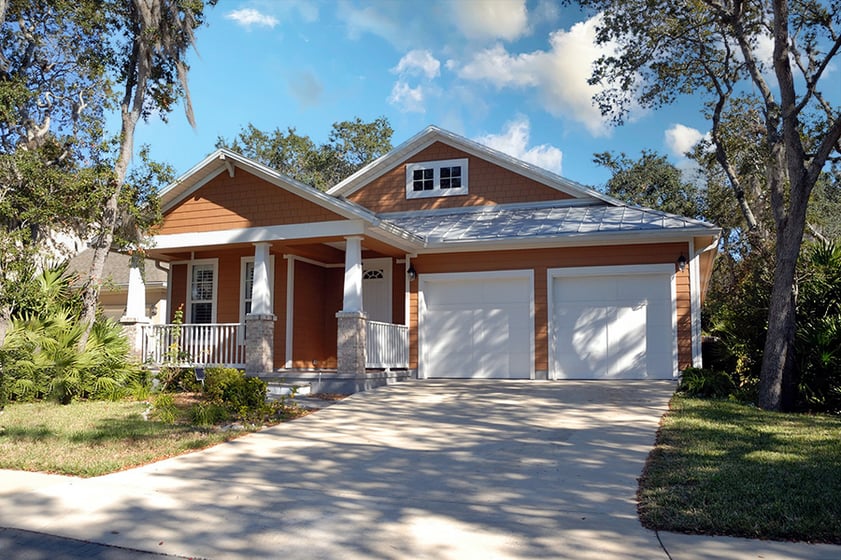 How Do Air-to-Air and Geothermal Systems Work?

From a technical perspective, geothermal and air-to-air heat units are not too dissimilar! The pieces of the puzzle start coming together when you call geothermal what it actually is: a ground-source heat pump.
This delineation brings things into context. A geothermal system uses pipes to move heat energy to and from the earth, while an air-to-air heat pump uses, well, the air! This concept of heat-exchange is how any HVAC system works. Energy is what's being moved from place to place. In winter, heat is pulled into the home from a heat source. In summer, heat is pushed away from the home and "dumped" into a heat sink - that being the earth or the air.

Air-to-air heat pumps come in many variations. You may hear them called "multi-zone" or "ductless" systems, which just refers to the technology's different installation methods and applications. One thing remains consistent: the unit is using the surrounding outdoor air to collect and deposit heat energy. Here are some different applications of air-to-air heat pumps that you may hear about:

Air-to-air heat pumps are commonly recommended in warmer (cooling-dominant) climates because they are an up-front "affordable" alternative, they don't need to handle a great deal of heating load (at which geothermal also excels), and generally boast greater efficiencies than their traditional counterparts.
Air-to-air systems are not without their disadvantages though, especially when compared to a geothermal system. For one, air-to-air units have outdoor condensers. These take up valuable outdoor square footage and contribute noise to your outdoor environment. By comparison, the geothermal heat pump lives indoors, typically in a closet or somewhere in the basement. The units are well insulated and typically produce the same operating noise as a freezer!

How Do Geothermal and Air-to-Air Systems Differ?

These two technologies differ most significantly in how and where they get their supplemental energy. While both systems pull electricity to run the main components, most of the savings come from the methods by which these systems move energy to and from their respective sources. Air-to-air heat pumps pull heat from the surrounding air in winter and push heat energy into the surrounding air to cool your home in summer. Geothermal heat pumps use the earth to accomplish this. While that all sounds good, when you really think about the work each system has to perform, it's easy to see how geothermal tops the competition. In heating mode, an air-to-air heat pump extracts heat from the surrounding air and uses that energy to bring your home up to whatever temperature the thermostat is set to. Once the weather starts to dip below freezing, how easy do you think it is to pull heat from progressively colder air? Air-to-air heat pumps need to work overtime to account for the wide variation in outdoor temperatures.

With a geothermal system, the ambient temperature of the soil that surrounds the buried pipes (or, loop field) varies far less through the seasons, typically staying between 45°F - 70°F. In the dead of winter, geothermal can easily pull more heat from the 45°F soil than it can take from the 10°F above-ground air. In the warmer months, dumping heat energy into the relatively cooler soil is, again, much easier than attempting to dump that excess heat into the surrounding 85°F, 91% humidity air. There have been in-depth studies covering exactly this difference in performance.

In a two-year-long study conducted at the ASHRAE (American Society of Heating, Refrigerating, and Air-Conditioning Engineers) headquarters, the group pitted a ground source heat pump system (geothermal) against a comparable variable refrigerant flow system (air-to-air), each working to heat and cool two separate floors of its 31,000 sq. ft. headquarters. Over time, they found that the VRF solution used "twice as much energy" as their geothermal heat pumps. As seen in the below chart, in every month but the first, the geothermal system tackled its heating and cooling load at a far lower energy use per square foot in comparison to the installed VRF system.

If you'd like to get into the specifics with a full report, feel free to read on here!

How Much Could Geothermal Save You Over Air-to-Air?

Let's now look info some real-world data and compare the operation costs between the two systems. Since air-to-air solutions are most regularly installed in warm climates, we've ran the numbers for this 2,500ft2 home in Jacksonville, Florida. Each system is set to keep the home at 70°F in winter and at 75°F in summer.

The costs associated with providing hot water to the home are an often-overlooked place in which many homeowners can see significant savings. To meet the annual hot water requirements of this home, the system needs to provide 10.8MMBtu of energy towards water heating. MMBtu (Million British Thermal Units) is a unit measuring the amount of heat required to raise the temperature of a pound of water by one degree Fahrenheit. The greater the MMBtu load, the greater the demand is on the system for heat delivery. To meet the home's annual hot water usage, it would cost $544 if an air-to-air system were installed. If the home had gone with geothermal, the number would be a much lower $203 annually. Most GeoComfort units come from the factory with a desuperheater, which is a component that captures excess heat to provide a portion (or all) of the home's hot water.

While there is minimal demand for heating in Jacksonville, Florida, it's vital that the system performs in all seasons. An electric heat pump system must to be able to handle heating and cooling at high efficiencies. Here, the annual heating load is 14.3MMBtu, which is comparatively low. For example, the heating load for an Illinois homeowner can be upwards of 61MMBtu. Even at a relatively light load, the geothermal system comes is 52% cheaper to operate than a high-efficiency air-to-air unit. The geothermal heat pump's annual heating operation cost comes out to $107, while an air-to-air heat pump would charge $225 for the same amount of work.

When it comes to cooling in the summer, both systems are up against a much larger task. High humidity can slow energy transfer, making it difficult for an inferior system to pull heat away from the home. In the warmer.  months, the annual cooling load is a considerable 63.7MMBtu, over 4x greater than the annual heating load.

As mentioned above, air-to-air heat pumps perform their best in warm temperatures. In this study, the air-to-air unit handles the annual load for an estimated $666. The geothermal system is just under the competition here at $527 annually - an average of $44 per month.

When annual costs are added up, geothermal saves this homeowner 42% on an annual basis while providing heating, cooling, and hot water to the home.

Check out all the raw data below! 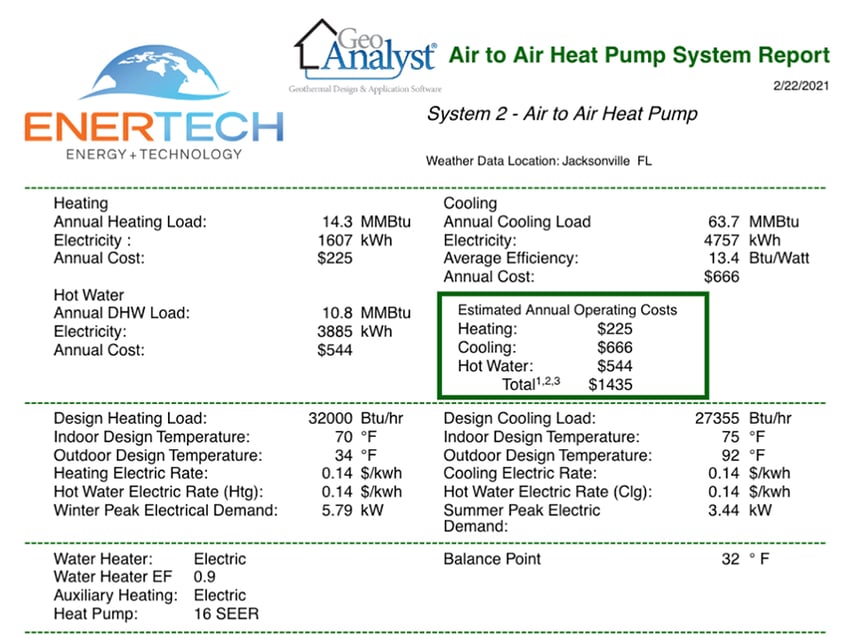 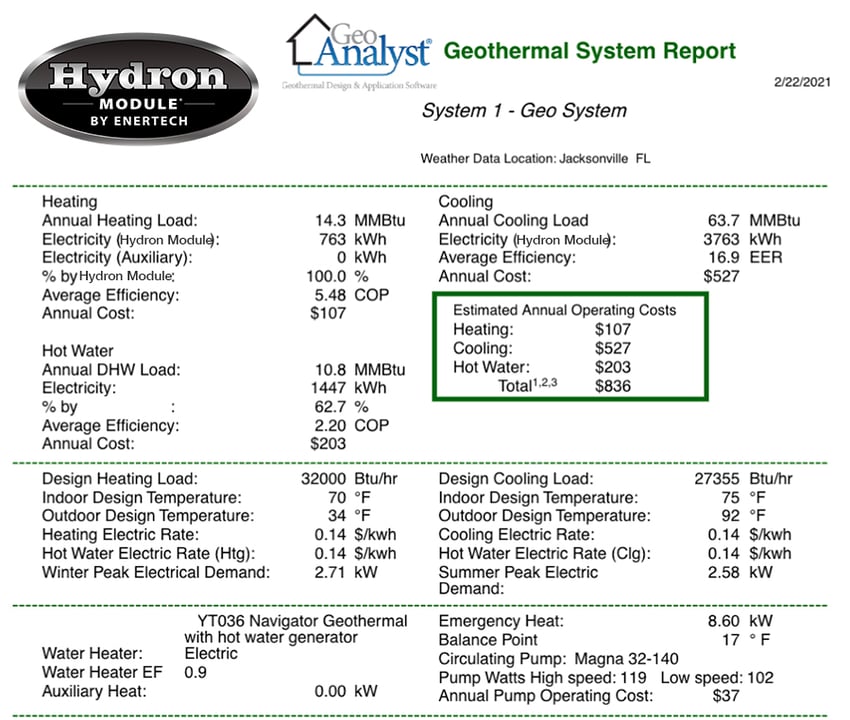 In coastal regions where the atmosphere consists of both high humidity and high saltiness (salinity), air-to-air systems can corrode at much higher rates than geothermal. This isn't just relevant for beachfront homes, though. While the salt content of the air gets exponentially higher the closer you get to the shore, high levels of "atmospheric salinity" have been detected upwards of a mile inland.

Air-to-air heat pumps must to be swapped out frequently due to these high levels of corrosion. Homeowners in these conditions regularly replace their systems every 7-10 years. Since geothermal doesn't require the use of an open-air heat exchanger and the main unit lives indoors, it's protected from the elements and has a lifespan that's 92% greater than traditional systems.

Interested in learning more about how much you can save by switching to a geothermal system? Contact us today and get a free geothermal design!

Financing For Geothermal: How Does It Work? 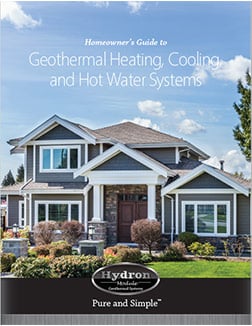 Work With Our Products

Learn more about partnering with Enertech to experience how we make geothermal better.